Well, painting has commenced again for my SYW forces. I have found a new method which prevents me from being overfaced by trying to paint too many figures at once: I just do 4 at a time. This means I can chip away at creating a unit in any spare twenty minutes or so, just doing one or two colours. I can usually do one group of 4 in a week with this method. Slow, but sure, and I find by doing a little but (fairly) often I can maintain my enthusiasm. As you can see, no advance on the usual basic style! 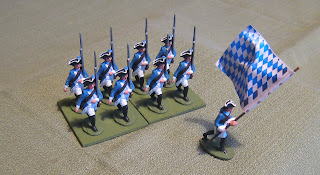 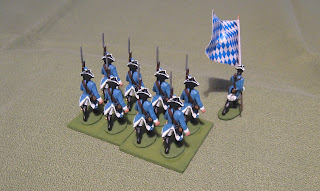 The unit being created is a battalion of the Bavarian Leib Regiment, to join my Austrian forces. This will give me the excuse to have a unit rated 'D' (for Minden Rose) or 'poor' (if using my own rules), so that I will be able to use a part of the rule sets I have not exploited before. This might be a bit unfair to the Bavarians, who may well have performed better if they had not been subjected to a textboook example of Frederick's oblique order at Leuthen, and also not had the retreat of the Wurttembergers as an example.
As you can see they are painted in the early war uniform, before black facings were adopted. I have also used the option of brown leather cross belts. Some sources indicate white for these, but brown makes a change amongst all that white. The standard bearer is a converted Spencer Smith advancing musketeer: the musket has been cut away and the hands drilled for a piano wire flag standard. The excellent flag is by Body's Banners, which are sold through Redoubt Enterprises.
I must say I find these Spencer Smiths a real problem. The castings are so poor, even basic detail such as where the coat ends and the trousers begin is difficult to establish. And check out those boxing glove hands! I salute those like Henry Hyde who have the skill and dedication to really make something of these figures - see the Spencer Smith website for photos of Henry's work. No black lining for me I'm afraid: I don't have the skill or the patience to create detail that isn't already there. It is only fair to remember that these figures are from the 1960s: actually it's great that they are still available for those who (rightly) value nostalgia and a certain elegance, especially en masse. Nevertheless, thank heavens I went for RSM figures for my armies!
Once a twenty figure unit of these is finished, a similar size unit of Freikorps will be painted, to provide the Prussian army with a battalion of similarly low grade troops.
Posted by Keith Flint at 22:08

Well, I think you did a very good job on them anyway! The non-blacklined look works, too. En masse on the tabletop I'm sure they'll look good, too.

Yes Fitz, it's like I always say: they're fine as long as you don't look too closely!

While the black-lined look is neat, I also do not use it. My figure painting style is similar to yours (although not as neat alas).

I like your troops and also have lots of RSM lead waiting for my paintbrush (with more on order).

What too many people fail to realize is that relatively simple paint jobs actually work very very well on the table top . . . where we see units instead of individual figures.