The Action At Annie's Farm

In late April I once again travelled the short distance to Stuart's house for our monthly game. The table was set out with a particularly delightful collection of figures which Stuart had selected from his Tardis-like set of storage cabinets and boxes. In short, an American War of Independence game had been prepared using 40mm figures from the Front Rank AWI range. Annie's Farm itself is from the Caliver 15mm 'Battlefield Buildings' range.

The units were infantry regiments or battalions of 10 figures each. No cavalry or artillery were present. The British had 7 such units plus a 7 figure unit of Indians, whilst the Americans had 9 units. The slight imbalance was corrected by one British unit being grenadiers. Rules in use were (of course) a much simplified version of Charge!, adapted for the narrow table available. These are appended at the end of the post. I was offered my choice of side, and chose the British.


The photos give a flavour of the action. With a number of American units removed from the table after suffering two thirds casualties, Stuart conceded.

The Figures
Just a couple of close-ups of the lovely figures it was my pleasure to handle. 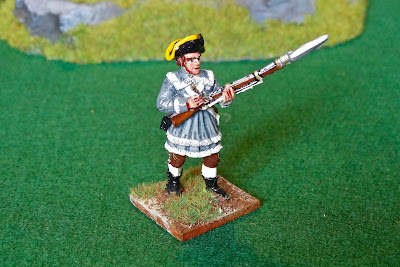 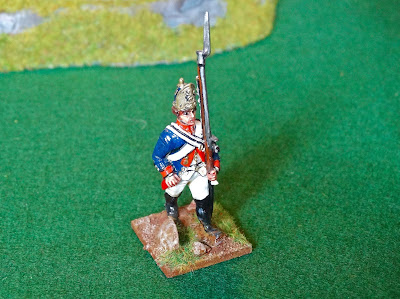 The Rules
These simple, one-side-of-A4 rules proved ample for an afternoon's wargaming between gentlemen. A few additional paragraphs might be needed if we play some more games in future.

Distance of Charge  Type of Target          Range for Musketry Effect

MELEE
(Roll one dice per figure.)
Infantry v irregular infantry and infantry v infantry, individual combats,
grenadiers add +1 to each dice.
RESULT: Draw unless one side scores more than one dice ‘pip’ than the other. Casualties include those from any fire received when charging.
DRAW – both sides withdraw half a move, rally next turn.
WINNER – Rally on spot next turn.
LOSER withdraws one move, then rallies next turn.
UNDER STRENGTH: Units become under strength when they have lost 2/3rds their number and are immediately removed from play.