We all know that sets of wargaming rules are coming out thick and fast these days. Personally, I think this is a good thing - whatever period you are gaming in, or are thinking of gaming in, you have a wide choice of rules to compare and contrast. It is also heartening to find that some of the new rulesets offer a genuinely new outlook on wargaming, offering fresh ideas and the chance of doing something genuinely different. In this latter connection I wanted to flag up the recently released Bloody Big Battles rules.

Now I should admit to a personal interest here. I first encountered these rules at the Oxford Wargames Society a few months before publication, as the author (Chris Pringle) is a member of the society and was one of the first members to welcome me in when I joined. Since then I have enjoyed three or four games with these rules, usually in a group of at least 4 wargamers, and all have been an excellent experience.

The rules do not cover either of my own main periods. They are designed primarily to game actual battles of the late nineteenth century (1850-1900), from the Crimean War through the American Civil War and on to the Franco-Prussian War, with stops at all the more minor wars along the way. The idea is that the big battles of these wars can be fought out in an evening. This I have found to be entirely possible - my most recent experience was to fight the 3 days of Gettysburg in the company of around 5 other gamers in (if I remember correctly) about 3.5 hours. The game was a lot of fun, as well as being quite instructive.

The rulebook is of 54 pages in roughly A4 size (being published in the US where they don't do proper A4). The publishers are Skirmish Campaigns, and I got my copy through Caliver Books for £18.50 plus p&p. The rules are contained in the first 25 pages, and the rest of the booklet consists of 9 scenarios for the Franco-Prussian War, covering all the main battles. Full details are provided, including a detailed map, to allow each to be fought out on a 6' x 4' table, except Le Mans which requires an 8' x 4' layout. This is a no-nonsense black and white printed rulebook with no fancy pictures or modelling tips, just the rules and the scenarios. 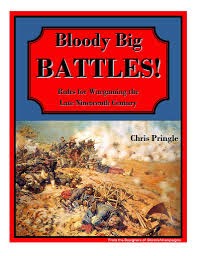 There is no real need for me to detail how the rules work - suffice to say that they are straightforward, easily comprehended and neatly summarised on a 2 sided playsheet which is provided at the back of the rules. The trick of condensing these big battles down is done by making the basic element a 1" square base representing around 1,000 infantry or cavalry or 36 guns. The basic game 'unit' for infantry is a brigade or division of 3,000 to 7,000 men, obviously of 3 to 7 elements. Cavalry brigades or divisions tend to be smaller, and are allowed down to a 2 element size. Gun elements operate as individual units. Figure size is not important - stuff as many of your favourite figures on a base as you want. Obviously 6mm or 10mm figures will work best in creating a physical picture of these large engagements. You might even try 2mm or 3mm figures, but if thinking along these lines I suggest you seek professional help, or just admit you don't like toy soldiers. To get started quickly, some gamers might want to resort to troop blocks or card markers rather than actual stands of figures. Ground scale is around 1" to 200yds, and a turn is 1 hour or thereabouts.

As to creating the battlefields themselves, I can reveal that the author makes excellent use of felt for roads, rivers and woods which can thus be made cheaply and used flexibly. Imaginative use of a collection of TSS 10mm-depth hills creates the topography. Carpet tiles come to mind as a good alternative for hills. The use of a gaming mat, under which you can put whatever comes to hand to create the appropriate hills, would probably be my method.

Already available is a further scenario book, entitled Bloody Big European Battles, which contains a further 16 scenarios and campaign suggestions from a variety of European wars - the scenarios are listed in full in this post on the Pendraken Forum, where you will also find some additional info about the rules concepts from Chris. 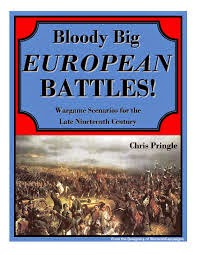 However, Chris has asked me to say that rumours of a forthcoming work covering World War One, entitled Fucking Big Battles, are incorrect.

One would have to say that this is a fairly specialised ruleset written for a specific purpose, but any wargamer worth his salt could easily use them for fictional large battles and campaigns. They represent a very well thought out and straightforward way into gaming large size engagements involving tens of thousands of real troops.

Online support is available at the Yahoo Group, as are more scenarios to freely download. These downloadable scenarios have the battle maps in colour, which is a big plus, and perhaps my only criticism of the rulebook is that some colour would have been welcome to make the maps easier to use. See also Chris's Flickr page for more maps and photos of games in progress

I'm looking forward to enjoying more games of BBB in the future. They really are something different and well worth looking into.

Hello Keith. I like toy soldiers and while I am waiting for my appointment for treatment to come through might be looking at these rules for 2mm. I think the big battle visual effect comes through with this small scale. There may be a problem with markers but will have to see. There is a review of the rules in the latest MW/BG (which also includes one of the excellent three in one command challenges).
Best wishes.

Hi Keith, thanks very much for helping to spread the good word about BBB. I now feel I will have to expand it for WWI, if only for the title!

Nice review Keith and have read lots of positve things about the rules on the Pendraken forum.

Jim -you're clearly a lost soul!

Good luck with the treatment.

Just read your article on BBB - very amusing. I must say that currently there are 3 rulesets holding my attention - HOW, BBB and the big battle ACW set, Altar of Freedom, all of which are also heavily supported on the internet. A real revolution in wargaming enjoyment after years of playing what seemed to be maths homework.