I've been widening my knowledge of the Seven Years War recently, beyond just the conflict between Prussia and Austria. The reason for this will be revealed in the new year, but so far it has involved me wasting my money on, I mean, investing in, quite a number of books. So I thought I would set down my thoughts for the benefit of other SYW buffs.

Top of the Shop
My star buy isn't a book at all, though. 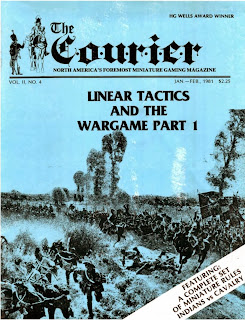 After 'discovering' Courier magazine as a source for a SYW scenario (see battle report in previous post), further investigation revealed that volume 2 of the magazine (1980-81) had the Seven Years War as its main theme. Just $12 got me all 6 issues, uploaded in a few minutes from the Wargames Vault site. And there, in issues 4 to 6, were the three parts of Richard Reihn's article 'Linear Tactics And The Wargame'. All I can say is, if you wargame the SYW, get these articles and read them. Here is an educated analysis of how linear tactics worked and why, which to me was fresh and very enlightening. The articles will give you an excellent perspective on how well your rules of choice represent the period; and if you're developing your own rules (as I am), the information here is essential groundwork. One of the most absorbing reads I have had in many a year.
The other 3 issues have some interesting articles as well, but mainly for nostalgia reasons.

Ospreys and more Ospreys (as well as some Ospreys)
I got together the following list:

The interesting thing here is the variety of approach amongst some of these books, despite being part of the same series. One expects Osprey to demand a consistent format, but it doesn't always happen.

Rene Chartrand has the same problem with his books as Digby Smith had with his Armies of the Seven Years War: he can't tell the difference between a book and a list. His volumes on the French army list all the units, and are an excellent painting guide, but information on tactics, performance and army quality are conspicuous by their absence. A disappointment for wargamers. Angus Konstam, on the other hand, has got the idea - his 2 books on the Russian Army give a great overview of how the army developed and performed, as well as how it looked. Stuart Reid's book is (as he admits) basically the story of 'His Britannic Majesty's Army in Germany'. It is thankfully along the same lines as Angus' book on the Russian army, and gives a neat introduction to the composition, quality and appearance of this allied force. Stuart's other book on the British Redcoat is another good one, giving some useful insights derived from primary sources.
Daniel Marston's general introduction to the SYW does exactly what it says on the tin, but has the bonus of a series of brief overviews of the main armies, noting their strengths and weaknesses. A handy and interesting book to have around.

Prussia's Glory, Christopher Duffy
I'd avoided buying this book as I already had the Osprey on the Rossbach and Leuthen camapign. My mistake. This is not a massive book (around 200 pages), but the detail on the campaign, the armies involved and the battles themselves is on another plane. Excellent maps throughout help to explain things. To be honest, the account of Rossbach is a little vaguer and less easy to follow than the account of Leuthen, but the latter is a tour de force that represents as near to a definitive account of this action as we are likely to get.
The other great thing is that along the way the reader gets a real insight into how armies in the SYW actually functioned on campaign and in battle - in other words, analysis is given as much importance as description. A further bonus is a good section on the origins and quality of the Reichsarmee.

The Coward of Minden, Piers Macksey
On the subject of analysis of how SYW armies worked, here's another first class source. Lord Sackville's reputation is restored to a large extent, as a result of Mr Macksey's detailed investigation of primary sources, but we also get a great description of the Battle of Minden and a fine insight into campaigning and fighting battles in this period. A thorough and balanced view of Ferdinand of Brunswick's strengths and weaknesses is also provided.  Don't hesitate to get hold of this book if the campaign and battle of Minden, or the general subject of the western theatre in the SYW, is of interest to you.

Charge!, Peter Young and J.P. Lawford
I guess it's a bit late in the day to review this baby, seeing as it was published in 1967. I got the softback reproduction from Ken Trotman, which is fine and nicely done. There is some interesting background on 18th century weaponry to start with, but basically this is all about nostalgia, and on that basis I'm glad I made the purchase.
As for the rules themselves, I'm surprised people still play them. Old School simplicity? There's about 25 pages devoted just to resolving melees in the 'advanced' rules, which I naturally skipped. I bow to no one regarding my interest in the early texts of our hobby, but whilst some general ideas and concepts can be useful, the overall impression from old wargaming books is that in terms of rules the hobby has moved on a long way for the better over the decades.
Still and all, a great book to own.

I think that'll do for the moment. I've had some great reading over the last few weeks, and have learnt a lot.

Some interesting overviews of your latest set of books, especially with regards the Osprey series.

Thanks Keith! I wasn't aware The Courier was available in PDF. Awesome.

Thanks for the tip - I shall have to have a look at these articles.

I have to disagree about Charge though. The rules are nice and simple, just written properly with comprehensive examples.

I totally agree about Courier (but then its another magazine kind enough to have me appear in print).

Could disagree more about Charge! although I would have agreed before I started actually playing them this century. This are one of those rules sets that will let you try almost anything, it just makes sure that unorthodox tactics will usually fail without any special rules. There are subtleties I didn't grasp until I experienced at least a 1/2 dozen games.

More than that, the combination of simultaneous moves to written intentions and generous moves with combat that occasionally has extreme results (ala Guards at Fontenoy) and it makes for a very exciting and fast paced game.

Ross and Prince Lupus, I bow to your greater experience of these rules. But moving individual figures is still a no-no for me.

Thanks for the heads-up on 'The Courier' articles in pdf. Purchased and looking forward to reading them. Cheers,
Paul

I managed to buy a copy of Prussia's Glory a few years ago by chance having discovered it was out of print. Well worth a read. I have not read the Coward of Minden so I'll try and track down a copy. Thanks for the heads up.

Anyone who has a read of those Courier articles - would appreciate any comments..