The Attack at Weissbach

Naturally, during a holiday weekend a wargamer's thoughts turn to, well... wargaming. Especially when the house will be empty due to wife and daughter being out each day attending the Badminton Horse Trials. My broken arm is getting steadily more comfortable so I reckoned I would be able to set up a proper wargame. With my old buddy Paul also available, we would have the luxury of a relaxed afternoon game.

My inspiration came from Warning Order, the online wargames magazine. Specifically, WO 34, which contains a SYW battle report between Austrians and Prussians played using the Age of Reason rules. The battle used a neat little scenario where a fairly basic attack-defence situation was enlivened by a flank attack taking place over a river crossing. This sparked my interest so I decided to steal the idea for my own game.

Laziness has prevented me from drawing a map this time, but the setup is pretty obvious from the photo below. Prussians attacking from the left. The name 'Weissbach' for the village or small town just popped into my head as I was going to sleep one night. I added a ford across the river near the Prussian baseline to give a little flexibility to Prussian movements should the bridge be too solidly held. I think my table (6' x 4') must have been smaller than the original, and my units bigger, because I found the table quite densely packed when I laid out the forces, which contained about the same number of units as the original battle. 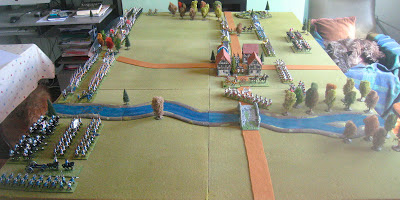 I swapped the sides around so that the Prussians were attacking. Forces were:


The bridge and village would cost the Austrians one point for each - i.e. losing either would be the same as losing a single unit towards the Austrian breakpoint.

The Battle in Pictures


On The Question Of Moves

As you can see, the game was concluded in just 4 moves, which took about 2.5 hours to play. My rules seem to generate this type of game - a relatively low number of moves but lots of action in each one (see this post for example). This was not intentional - I just tried to develop a set of rules that would produce a fairly simple and brisk game. Doubtless the scenario contributed to such a vigorous action - the table was of a modest size and was well packed with units, which were therefore likely to go head to head without too much delay.

Nevertheless, there is a strong contrast with rules like Charge!, where 20 moves to get to a conclusion seems common even where fairly small forces are in use. The move count in the Table Top Teasers in Battlegames bears this out. Whilst Charge! can hardly be considered a complex set, it seems to me it can be time consuming. I have always thought this was linked to the availability of a permanent wargames room in the author's home, and the consequent ability to wargame at a relaxed tempo.

I'm not sure whether to regard the low number of moves usually required by my rules as a good or bad thing. I have achieved my objective of creating a set that will allow me to conclude a game in an evening (say 3 hours of play) whilst using most of my toys (about 350 figures of all types per side organised into around 25 units per side). What seems to catch some people by surprise is that players start to lose units quickly - melees are always concluded in one move, and firefights rarely last more than 2 moves before one side or the other retreats or is lost completely. Other rule sets I have used in the past tend to give players a slower build up to the point where they start losing units - I am thinking here, for example, of Rank and File, Minden Rose or Maurice. Black Powder is more akin to my own rules - the action flows thick and fast and desperate situations can occur right from the start of the game.

Whatever my eventual conclusions about my rules, the important thing with developing your own set is that the journey is so much a part of the pleasure. Whether I suddenly gain inspiration and decide to change the way my rules work doesn't imply an admission of previous failure - it is just the next step in a pleasurable process. Unless of course you're daft enough to try and develop a set for commercial release, in which case time pressures presumably make things rather more like work.

On Setting Up The Table
As in some other recent battles, I set up both sides in advance, giving my opponent choice of forces on arrival. This means battle can commence immediately, but of course it precludes the tactical interest of each commander making his own choices about deployment. This game was a natural for setting up on each side of a curtain, but with my broken arm, rigging the curtain in advance would have been too much of a trial.

But to be honest, I love to set up both sides once the terrain is laid out, just to see how things look and to complete the spectacle. So it's time to be a bit less selfish, I think, and allow opponents to choose the deployment of their own forces.

Anyway, this was a fine, agressive and action-packed game. No real alterations to my rules presented themselves. I think perhaps the advantage of forces was a little too much in the Prussian's favour, so I would probably remove their independent hussar regiment if I played the scenario again. It would also be interesting to play the game again using Black Powder, as comparisons can be very useful, but whether time or motivation will allow remains to be seen.
Posted by Keith Flint at 17:01

A cracking looking table and figures as always Keith. The game itself was certainly quick and bloody, with the poor Austrians probably still shell shocked from the initial assaults on Weissbach.

It would be good to re-run the game with say BP, but as always time and more importantly motivation may preclude this.

I agree with Steve J., great-looking table, terrain and figures.

It's a matter of personal tastes, and circumstances as well, but I like rules that get into the action quickly and resolve things quickly. The way your rules and reports sounds good to me.

Super looking figures and terrain as ever

I guess it's the use of rules that allow more than 1 normal move in each turn, like the 3 possible moves with BP, that are making games with fewer turns. In BKC you often get the equivalent of 3 or 4 turns from a traditional set of rules happening in just one move.

Fine looking set up and great looking armies, Keith. I have a special interest, too, in what mileage other gamers get out of limited space, such as a 6'x4' table (I've had to kiss goodbye my hopes ever to expand beyond my own similar sized table.

As far as rule sets are concerned, I tend rather to like a certain amount of build-up to a denouement, protracted fire-fights and the charge and counter-charge of a large-scale cavalry fight. But I can certainly see big advantages to be got from the quicker sort of game.

That looks like great fun and the whole setup is really well executed. Thanks for sharing!

I just love looking at your battles. They troops, scenery, and after action reports are simly the best. Two to three hours seems optimal so your rules work. Best regards, Bill

From the creator of the world famous Reich Duchy of Beerstein, kind words indeed. Maybe 'simply the best' is a bit more than I deserve, but on the other hand I'm a sucker for flattery!