Reading through one of my books on the Ju-87, I came across mention of the Stuka's predecessor, the HS-123, and the fact that it had seen service in Poland. A quick bit of internet research showed that although the aircraft had not been entirely successful as a dive bomber (due to a lack of precision in the dive), it had been switched to the ground attack role in which it had been quite successful. What particularly stirred my interest was the information that in Poland, with the Stuka being used in the tactical bombing role (i.e. working behind enemy lines), it was the HS-123 that was more likely to be encountered providing air support on the battlefield. It could use improvised airstrips even more readily than the Stuka, thus operating from close behind the advancing troops. This, combined with the aircraft's rugged simplicity and reliability, resulted in a high sortie rate that the Germans found very useful. The aircraft is also described as being able to deliver its modest bombload with considerable accuracy.

This made the aircraft an attractive prospect for use in Blitzkrieg Commander games. I began to feel the need for a little retail therapy. What swung the balance was the information that the aircraft went through the Polish campaign painted in the old thirties-style three colour camouflage. Repainting the aircraft in the latest scheme wasn't considered worthwhile as they were classed as obsolescent and were due for retirement after the campaign (in the end, they were still serving on the Russian Front in 1944). Whatever the reason, here was a funky new paint scheme to enliven my table.

The Model
My first port of call for a 1/100th scale model was Armaments In Miniature, who had supplied my Stuka and Karas models. The quality of the AIM products is unsurpassed, but their HS-123 was listed as a future release, which probably meant it was ages away. However, help was at hand on the Old Glory website. Under their "Lil' Flyin' Fokkers" range was just the model I wanted, at a fairly reasonable price.


I was pleasantly surprised when the model arrived. Although not up to the standard of refinement (bordering on perfection) achieved by AIM models, this was a fine piece of work. Nicely formed parts in resin and metal with no air bubbles or flash, which went together pretty well. Alright, putting the top wing on is a bit tricky, but a glue that allows some fiddle time and a reasonable dose of swearing did the trick. The photos below show the model mostly complete. 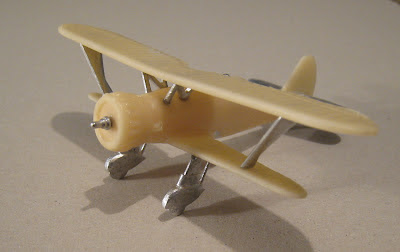 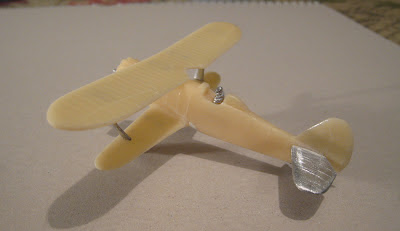 There are plenty of internet sources to give details of colour schemes and markings. Appropriate decals are also available from Old Glory, though you have to find your own serial numbers. Mine are entirely spurious and derive only from what I had left over from old kits. The finished model is shown below. The flight stand is home made. 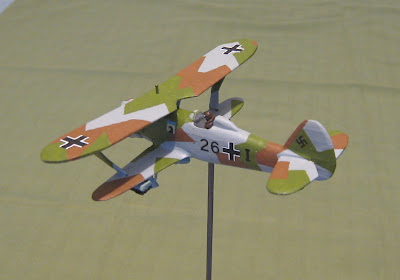 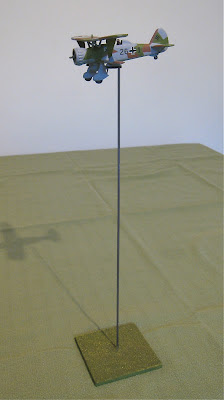 As you can see I like a stand that gives the aircraft a reasonable height over the table - about 12" being my preferred altitude. I don't like those short stands some gamers use, with the aircraft skimming 2 or 3 inches above the playing surface.

The HS-123 in Blitzkrieg Commander
So now I have 3 aircraft units to deploy for my 1939 battles. The BKC stats for them from the rulebook are:

Pete Jones bases his attack values for aircraft like these on the weight of bombload (he told me so), so you can see where he's coming from - the Karas carried a maximum load of 750kg, the Ju-87B-1 (not the B-2) 500kg, the HS-123 450kg. But wait a minute. The Karas a better ground attack/tactical bomber than the Stuka? Nay, nay and thrice nay! The point of the latter was accuracy, which I reckon made it significantly more effective than the rather indifferent Polish product. And it seems, from all the sources I can find, that the HS-123 rarely carried 450kg of bombs. The centreline hardpoint was usually (if not invariably) reserved for a drop tank to offset the aircraft's poor range. So bombload becomes 200kg (4 x 50kg bombs carried under the wings). Finally, the HS-123 had reputation for taking a lot of punishment, which I assume is the basis for the 4 hits. But the Stuka had much the same reputation. The smaller size of the Henschel aircraft would also count against it here - at least that's how it seems to work with tanks in BKC.

Not wishing to depart too far from the rules, I'll say the greater accuracy of the Stuka compensates for its smaller bombload. The HS-123 is also usually described as an accurate ground attack aircraft, but this can't entirely offset the small bombload. I'm also unconvinced about the extra hit for the HS-123. Hence the stats I will be using (until someone convinces me otherwise) are:

One might conceivably give the Stuka and Karas attack values of 4 and the HS-123 3, but I like my air support to be effective when it arrives, so I've gone for the higher values.

Bedtime Reading
I always like an excuse for some background reading, so I treated myself to the book by Robert Panek. Except that I now find out it's not released until 15th July, although Amazon said it was available from 28th May and would be delivered on the 30th. This is not the first time I have heard about spurious and optimistic publishing dates on Amazon - something to look out for. If you're pre-ordering, check the expected publication date with the publisher.

Anyway, this certainly looks like the book to get: MMP have an excellent track record with their books on some of the less well known aircraft of WW2. I'll just have to be patient. 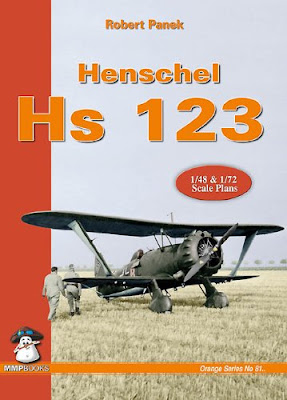 Overall then, a nice bit of fun getting the Henschel into my collection. I look forward to using it in action!

Added on 30th November 2012: this book has been put back twice, and is now scheduled to be published in January 2013. Becoming fed up with this process, I cancelled my order.

A bit of retail therapy works for me when required. An interesting piece as always and you've done a lovely paint job on that model. I hope to see it in action against my Russians at some future date.

Really like the model and the camo. If I could offer some advice - it looks a little 'clean' for a warhorse? would an inkwash help bring it to life?

An interesting thought Doug. Any advice on the best wash to use? I don't want to spoil the model with an ill-advised effort. My usual method would be some sort of dry brush.