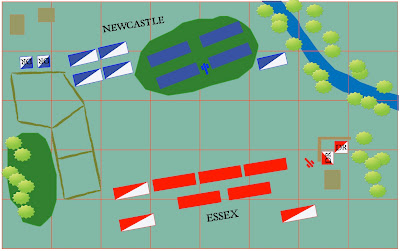 Now what Horse and Musket wargamer could come across this map and not want to fight out the battle? Not that I'm blowing my own trumpet here: the map comes from the 'Lead Gardens' blog which I have recently discovered and which I highly recommend (see Favourite Links). The map depicts the set-up for the fictional battle of Burnt Commons (September 1642), during the English Civil War campaign created by Littlejohn on his blog.
Not much imagination is needed to translate this into a SYW battle using Black Powder. The village of Burnt acquires a 'd' to make it sound Germanic, and we use the following forces:
Austria (Newcastle/Royalists)
C-in-C (SR8)
Infantry Brigade (Brigade Commander SR8)
4 line infantry battalions
1 artillery battery
Cavalry Brigade (Brigade Commander SR8)
2 cuirassier regiments
2 dragoon regiments
1 hussar regiment
1 light infantry battalion
Prussia (Essex/Parliamentarians)
C-in-C (SR9)
Infantry Brigade (Brigade Commander SR9)
2 grenadier infantry battalions
3 line infantry battalions
1 artillery battery
Cavalry Brigade (Brigade Commander SR9)
1 cuirassier regiment
1 dragoon regiment
1 hussar regiment
1 jager detachment
Notes
I resisted the obvious temptation to make the side marked in blue on the map the Prussians. That hill position looked too much like a typical Austrian defensive set-up, with the Prussians set to do the attacking. Therefore the Prussians have a couple of grenadier regiments included, and with their cavalry outnumbered it looks like they will be relying on their well-drilled infantry to carry the burden, as so often in real life. The Prussian infantry will be using the enhanced stats outlined in my post of 5th March, so we will see how they work.
The dismounted dragoons on the right flank of both armies have been replaced by light infantry as I have no appropriate figures for dragoons on foot. The light infantry and hussars on both sides will use the 'marauder' rule, the hussars being set down where the isolated cavalry units are shown on the map.
Two brigades a side is a small battle for BP, so I will be using one of my alternative Brigade Morale house rules. For this battle, units will count as lost for brigade morale only if they have been destroyed or have left the table and cannot return. That should avoid the action being over too soon.
The first side to have both its brigades broken will lose. If the winning side then has no brigades broken, they have scored an outstanding victory. If they have one brigade broken, they have had a hard fight and only score a minor victory.
Original table size was 8' x 5', but the original battle featured 40mm figures. Therefore I chose a 6' x 4' table which would give about the same amount of room for my 30mm soldiers.

The tavern in Burndt before the game
.

The set-up. I was able to be pretty faithful to the scenario map. 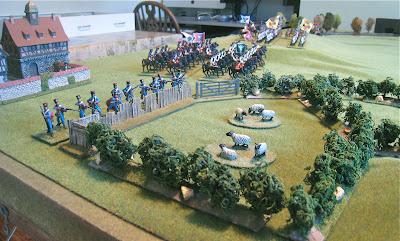 On the Austrian right the Croats keep a close eye on some of my recently painted sheep. These troops remained unengaged for the entire battle 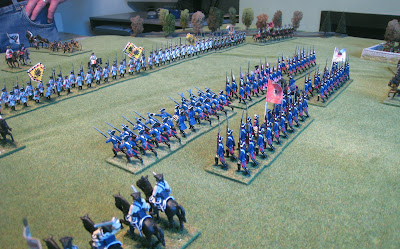 The game gets under way. The Austrians were sprightly and aggressive from the word go. They moved off the hill and formed all their infantry battalions into a single line. The Prussians edged forward to meet them, intending to give them a taste of Prussian volley fire. 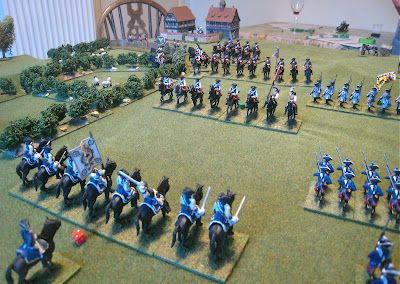 On the Prussian left, their cuirassiers (foreground) decided to take the opportunity to charge their Austrian opposite numbers, as the second Austrian heavy cavalry regiment had headed off into the fields.  With an uncanny foresight that was to be a feature of Austrian tactics for the rest of the battle, the Austrians didn't countercharge but rested on their numerous supports. Despite the Prussians' charging advantage casualties were equal in the melee, and so the support bonuses saw the Prussians driven back through their own supporting dragoons. The subsequent Austrian 'sweeping advance' then destroyed the dragoons, leaving the situation as seen in the above photo. 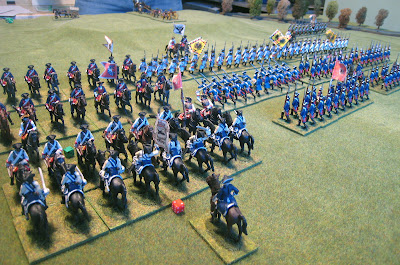 In the next turn the Austrians pressed home their advantage on the disordered Prussian cuirassiers. The result was predictable - the Prussian left wing cavalry had now been wiped out, and the cavalry brigade as a whole was broken. In the background the infantry firefight continues. 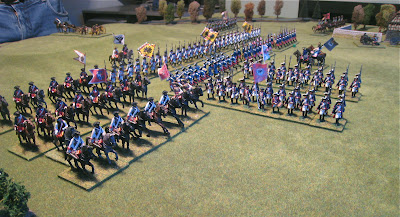 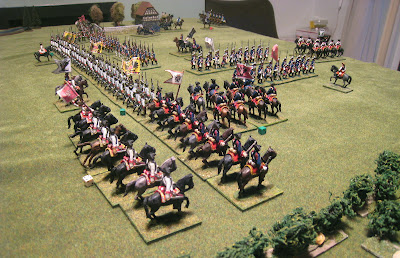 ...but the Austrians are on a roll. The leading cuirassiers get 3 orders and set off to cause mayhem in the Prussian rear (right background). Note the Prussian hussars pushed into the far corner of the table by their compulsory retire moves (extreme background). The Austrian dragoons prepare to charge the nearest Prussian infantry battalion in front and flank. 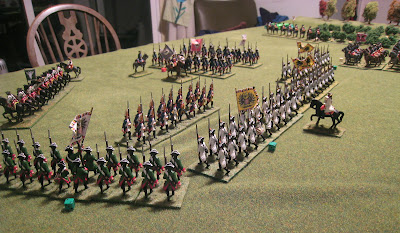 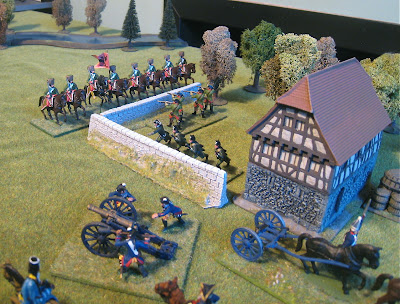 On the Prussian right flank the Austrian hussars had moved aggressively against the farm, hoping to push out the jagers. (We had decided that the farm would not count as a built up area, in keeping with what we saw as the spirit of the original scenario. The walls were cover, the building counted as decoration). 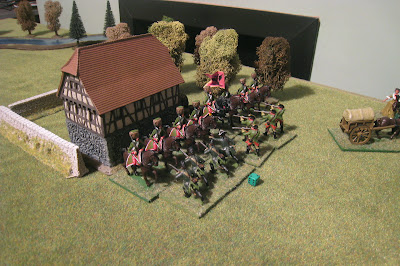 The jager were affected by the breaking of the Austrian cavalry brigade and had to give way to the approaching hussars. They were then charged in the final move of the game, surprisingly holding their own.
But this made no difference to the final result. The Prussian infantry were obviously about to be broken, whilst both Austrian brigades were intact. Therefore, the Austrians (curse them) had scored an outstanding victory.
In Conclusion
We had completed 5 moves in a leisurely 2 hours of gaming. The Austrian command rolls had rarely failed them and they ended up running rings around the Prussians, an unusual experience for Frederick's men. The rules had produced a typically sprightly and incident-packed game.
The increased firing stats of the Prussian infantry didn't seem to give them an unfair advantage, and I will continue to use them. In accordance with tradition, we had consistently forgotten the -1 to command rolls when within 8" of the enemy (12" in the original rules). We always seem to forget the equivalent rule when playing Blitzkrieg Commander! Still, it was the same for both sides. Another rule we often forget is that firing dice rolls of 6 cause disorder. Why this important rule consistently slips our minds is a mystery. But the game was most enjoyable anyway. Paul's excellent bottle of Berberana Rioja simply added to the pleasure!
Posted by Keith Flint at 10:17

Reich Duke Wilhelm was deeply impressed that his Austrian Allies were so successful in their engagement with the dreaded Prussians. He has instructed the College of Honors to invest the Austrian Commanding General into the Military Order of the Golden Crown. Such a well documented battle is an inspiration for all. Well done sir!

The Golden Crown? An honour indeed!

(Though personally I think it was all just lucky command rolls).

Thanks as always Capt Bill.