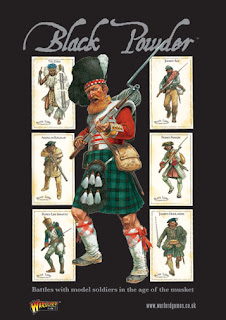 Excellent review! It's good to hear about some of the "downsides", as well as some comparisons to other rulessets. Nicely done! Thanks!

Very interesting piece. I've been considering buying BP for a while (as i'm happy with my own H&M rules it was - ironically - descriptions of it as a book about wargaming a la Grant's 'The Wargame' that tempted me), and at 20 quid i still might....but would it be 20 quid wasted...
Cheers.

DC - you are fortunate that there are a wide number of opinions out there on BP, so by pottering around the net you can compare different views, many of which would disagree with mine.

Good luck in your choice!

I agree with the fact that there should have been more guidance on which rules for which periods. The one I am struggling with is 'Mixed' formation - is it still relevent to FPW/ACW? At times it feels Napoleonic/SYW and stretched in both directions.

I've played one game, (napoleonic), which seemed to work quite well.

Interestingly, for a game that is obviously Warmaster based, it appears that people are wanting to use it for Ancients as well (see the Warlord forum)

and a FPW scenario
http://lasthussar.wordpress.com/2010/02/19/franco-prussian-war-scenario-for-black-powder/

You'll see in this I give the Chassepot a 48 range.

I enjoyed your review, level and fair. having perused other parts of your blog, I like your practical nature. I am often limited by financial realities these days.
Thanks Steve
Be Well

Thanks Steve for the review, it very much mirrored my experience with BP using 15mm figures. I played one game (Queenston Heights 1812) with a friend who knew the rules that went very well other than sometimes forgetting the special abilities. Then I tried to run a second game on my own (Lundy's Lane 1814) with a group of newbies and it was a disaster, we made many mistakes mainly because of the difficulty in finding the actual rules amidst all the wordy prose (the free only QR sheet helped a little). I will try them again as I think there may be a good set of rules buried in all the fluff and I am trying to find a good set of rules for the War of 1812. I do like the flexibility for example you can change the figure numbers for the unit size to fit your collections basing style and number of figures. For example my “standard unit” will be changed from 24-30 to 12 to 20 figures. Just wish someone would produce a streamlined version of the rules without all the fluff.

Nice review. I've been playing the game for over a year now.

I'd pick out 2 points form your review - ones that worried me at first.

Special rules:I instinctively dislike such things, however they seem to work well when used sparingly.
Keep most units "vanilla" with special rules for a few elites - or a consistent special rule for particularly effective armies.

Lack of specifics: I think the writers know wargamers pretty well. They could have provided another book full of specific rules and ranges fo obscure kit (Russian against swedish pikes - shuvalov howitzers, grasshopper guns, volley guns. But what would wargamers do - go online and argue about the details. INstead they've taken the view that "If you guys know better, just change it".

Of course this leads to 1000 varieties all going under the Black Powder label. I hope it will avoid the regular revisions as we've seen with WRG and Games Workshop.

The biggest hope is that the game provides happy players. I'm quite satisfied on that count.

Good review - I think that one thing that I have found difficult is that they are similar to Hail Caesar and Pike and Shotte from the same publishers but with notable differences. I play lots of different rulesets but when a couple of sets are very similar in character it becomes difficult to differentiate them whilst playing, leading to errors and mental overload

It's interesting - this 4 year old post continues to generate considerable interest. I continue to believe that BP are a good set of rules.

I do however agree about different rule sets for different periods. I like each of my wargame periods to feel distinct and different, and I want the rules I am using to be designed specifically for each period. Otherwise, as you say, it can feel as if you're playing the same game, just with different figures.

Keith,
I wish I would have read this post when I set out to purchase Black Powder! I like the rules but I find I have some problems reconciling the things I can't figure out from the rule book.
I asked a particular question on the Warlord forum and received "yeah, that sounds good to me" from other players but no definite answer.

While I've only played it a handful of times, I have really enjoyed Rank & File as a rules set and will dust them off and give them a go soon.

I know this is a reply to a really old post but the review and comments are still relevant.

Thanks for a good review - you put your finger on all the points that bug me about BP.

Having said that, we have had many entertaining big Napoleonic games with them and one miserable small ACW game.

If I can be cynical for a second, the reason there is so little period adaptations given in the BP rulebook is so they can sell you the supplements! Its not that they can't be bothered. The supplements are also very fluffy with the actual period adaptations limited to 2 pages or so although they do give unit stats for the different conflicts and a number of scenarios.

The fluffiness of BP became so annoying for us that I developed "Black Powder Light" which is what we now use.

I have yet to try BP for 7YW using the "Last argument of Kings" supplement which I just bought. I have also used your HoW rules but never "Rank and File". Where can I get these?

Hi Richard. I think our assessments of BP supplements coincide! If you haven't found it already, search 'Keith's Wargaming Blog Last Argument of Kings' for my take on the 18th century supplement.

'Rank and File' is still available from the Crusader Publishing site, along with some useful pdf downloads. A good set of rules, IMHO.