A brief post to sing the praises of this website (run by Michal Derela) devoted to Polish armoured formations 1918-1939, including armoured trains. For those interested in wargaming the 1939 Polish campaign the information contained on the site is invaluable. It is written entirely in English which makes it (as far as I can tell) a unique source.
Michal is willing to take email enquiries about most Polish military subjects of this era. As an example, he emailed me the following photos of Polish self-propelled AA guns, on French De Dion-Bouton cars and then on PF621 truck chassis. My enquiry followed a discussion on the BKC forum regarding the Polish equivalent of the 88mm on 12 ton halftrack fielded by the Germans and featured in my recent post. 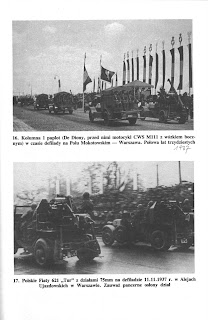 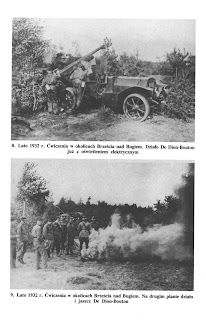 The upper picture in this pair gives a good idea of how the De Dion-Boutons looked. 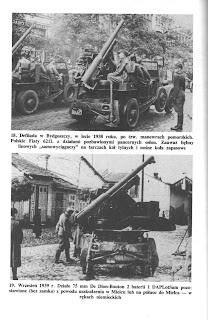 Here rear views of the French cars (lower) and Polish truck mounts (upper) can be compared.
Stephen Zaloga and Victor Madej's book on the Polish campaign (The Polish Campaign 1939 - not the Osprey written by Zaloga alone) indicates that 12 of the 75mm AA guns mounted on the cars were re-mounted on PF621 trucks. Michal tells me the number of conversions was 4. It seems both SP mounts were involved in combat in 1939. They were employed primarily against aircraft but did engage tanks on a few occasions, and with some success apparently.

Anyone interested in Polish military history of the 20th Century should check out this site. A link is posted (under 'Polish Military Site') to the left of this post.
Posted by Keith Flint at 18:42