Battlegroup Tobruk And The Return Of The Fallschirmjäger

I believe I hinted in my previous post that the ancient-period painting mojo was fading a bit. I'm sorry to say that shortly after penning those words, the mojo packed up completely in the face of a 12-strong unit of Parthian horse archers (hardly a challenging task for most wargamers, I guess).

But as so often happens in our hobby, as one door closed another one opened. Idly browsing the internet, I was reminded on the Battlegroup page of the Guild Wargamers forum that I had been neglecting my WW2 gaming, and that one of the last things I had been considering in that period was the purchase of Battlegroup Tobruk, the latest supplement in the Battlegroup series. 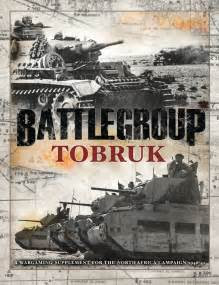 Shelling out £25 on this book was a tricky one. I no longer game this particular part of WW2 (click on the 'WW2 Desert' link at top right for my old exploits), and my sole interest in the book was the rules for parachute and glider landings included in the Crete section, which I wanted to use for some fictional airborne assaults set in the 1939 Polish campaign. Unfortunately no one I knew had the book, so getting photocopies of the appropriate section was a non-starter. I considered a cheeky post appealing for details on the forum or Facebook page, but this seemed rather too cheeky (not to say ungentlemanly). I had previously bitched (justifiably, IMHO) that the rules for Fallschirmjäger should have appeared in the 'Blitzkrieg' supplement, or even better in the original rulebook, so pride was at stake as well. But I had a whole stack of Ju-52s and DFS-230s sitting idly in a storage cabinet, plus a platoon's-worth of German paras purchased ready-painted some time ago. And of course my wargamer's consumerist itch couldn't be ignored forever.

Battlegroup Tobruk
So I bought it - you can get it on ebay for £24.95 post-free at the time of writing, but no cheap deals on Amazon for these guys. Was it worth it? Objectively, not really. Yes, I have the rules I wanted (amounting to about 3 pages), which are provided as part of a Crete-inspired 'Airborne Assault' scenario. They are neat and interesting rules which look like they should play well. Missing are rules for air-landing troops arriving under fire, a situation which featured significantly at Crete, but a simple adaption of the glider landing rules will be straightforward to write.

In addition to the rules, I have the army lists for German paras and glider troops in the early war period. These are important for Battlegroup because you need the points values and Battle Rating numbers to balance the games - or at least, such information is very useful to one's understanding of the game. But together with the rules this still only constitutes around a dozen pages from a total of 200. The extra set of Battle Rating counters and a new pull-out quick reference sheet will come in handy. Nevertheless, most of the book is of no use to me.

But to be honest I don't regret the purchase. These Battlegroup books are always nice to own, being well produced and including some good background reading. Anyone who knows me will be aware I am not really a fan of supplements as a concept, but Piers and Warwick have always struck me as decent guys who are dedicated wargamers and who believe in what they do. A minor criticism here is that no map or maps support the account of the Battle of Crete - the story of any battle without an accompanying map is always incomplete.

So I've paid £25 for a dozen pages of information which I reckon should have been in the basic rulebook anyway, and some air-landing rules are missing - but I'm actually pretty happy. Hmm. I guess that's wargamers for you!

The Bridge At Staruchy, September 1939
Time to check out the new rules in a modest scenario. Although the airborne assault rules were developed for the Crete operation, they seem to me to be perfectly suitable as a representative set for any opposed airborne landing. One of the unique rules for airborne assaults in Battlegroup involves placing 'drop canister objectives' before the fighting starts, and I had to knock up 3 of these from some old oil drum and jerrycan models, which I placed on 3cm square bases (this is 15mm scale): 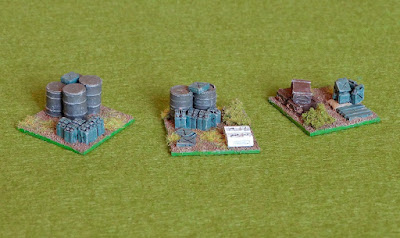 The scenario is a simple one, for a 4' x 4' table. It is of course entirely fictional - there is no bridge (that I'm aware of) at the tiny Polish village of Staruchy, which was only chosen because I liked the name and it was easily pronounceable in English. The bridge is, of course, to be seized by a small but elite force of German glider and parachute troops, and is defended by a Polish infantry platoon.

Defences: trenches/foxholes for 3 infantry groups and 20" of barbed wire. 50pts

I'll be conducting the game in accordance with the rules in the book, and we'll see how I get on with them. Further interest is added by the asymmetry of the two sides - although equal in points, the Germans have more than twice the BR of the Poles. This is a rather clever and quite subtle aspect of Battlegroup which I enjoy seeing in action, and this is probably the strongest contrast between points and battle rating I have seen in any of my games.

I'll probably play this one through solo - I'll try and post a report on the resulting game. But no promises!

Interesting to read this as I too have pondered getting the book, just for the Fallschirmjager section. I too think they should have been included in the Blitzkreig supplement. Looking forward to some possible feedback on this scenario.

I did have a memoir book written by a Fallschirmjager, who served from '39 - '44, the name of which escapes me sadly. Of interest was the fact that several times they were ready to be deployed, only for the missions to be cancelled due to the rapid German advances on the ground. So not unreasonable for them to be used in Poland, or France for that matter in some 'what if?' games.

The BG books are awesome to have even if you dont ever play them - so beautifully put together and a great mix of hobby and history. I have the whole set thus far and fully intend for that to continue.

Any chance of Me321 Gigants landing Panzer IVs or up-armoured Panzer Is? That would be a sight to see on the table.