A rather special visit to Stuart's this month. We were going to do a playtest of the ancients rules I have been working on, but the star of the show was going to be an ancients army made up of figures formerly belonging to Charles Grant (senior). When Stuart mentioned a while back that he had these figures in his collection, I was naturally fascinated and have been looking forward to the occasion when we could get them out on the table and not only take a good look at them, but use them in a game as well. I'll let Stuart explain the background... 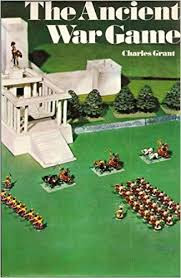 Trimsos meets ‘The Ancient War Game’? - Stuart Asquith Explains.
"Are we seeing war gaming history here? These 25mm figures were produced nearly 50 years ago, mostly by Greenwood & Ball (Garrison) and with some Hinchliffe models, and all featured in photographs in ‘The Ancient War Game’ by Charles Grant (senior), published by Adam & Charles Black in London in 1974.

All the figures shown here were originally in the collection of Charles Grant (senior); they are painted by him and date from c1971. The figures were gifted to myself – I rebased them on individual circular bases - by Charles Stewart Grant c1985.

Seen here are elements of a classical Greek army, including Boeotian, Corinthian and Spartan hoplites, with peltasts and slingers. Also, units from Alexander the Great’s army in the form of a phalanx (note length of pikes), hypaspists and archers. Finally some figures from a Successor army, plus a small unit of  Persian Immortals.

The ‘river’ has been formed using vac-formed stream sections (also originally owned by Mr. Grant senior) and is spanned by two bridges, all designed by Terry Wise and produced by Bellona c1980. The plastic Alder trees and wall sections are from the Merit range of OO/HO scale railway accessories.

The single contour wooden hills are domestically produced items. The temple is a recently purchased item from the aquatic section of a local garden centre."

Trimsos 5 (or thereabouts)
I brought over some of my own recently completed units to provide opposition. It was certainly interesting to see how the 25mm figures of nearly 50 years ago compared with current 28mm plastic and metal models.

A few photos of the game appear below. The field of Trimsos was slightly modified to create a more interesting battle, with more ground available to the west of the River Trimsos - which is actually more true to the map in War Games than the terrain shown in the book photos. We have also come to the conclusion that the battle will probably work better if the river is crossable throughout its length (rather than just at the bridges), with a suitable movement penalty of course.

All in all, a unique and inspiring gaming opportunity which was a real treat. I think the great thing was not just getting out these historic figures and admiring them, but taking the chance to wargame with them. That was, after all, why they were bought and lovingly painted in the first place.

Photo Parade
After the game (which we declared a draw - sadly time was limited), I took some close-ups of the Grant figures for your delectation.

Project Progress
So, just in case you've forgotten (or never knew in the first place), the Trimsos Project is about assembling all the units I need for a re-fight of Donald Featherstone's 'Battle of Trimsos', from his 1962 book War Games. I have decided to collect units from any period of ancient history to complete the armies, as the fancy takes me, and I am working on a development of the original rules rather than buying a commercial set. Once I've collected enough units for the re-fight, I reckon I will continue until I have 2 armies each of 10-12 units, and then settle down for some serious (well, actually, not too serious) ancient wargaming.

I now have all the figures I need for the Trimsos battle, although some units remain unpainted and (in the case of the chariots), unmade. I have some extra plastic figures beyond this basic requirement, enough for about 4 units, in my 'plastic hillock'. I must admit that the painting challenge is beginning to frustrate me now - I am impatient to get gaming with properly painted armies but the motivation for painting the last few units is sometimes wanting. Still, I will get there.

Latest off the painting table is one of my three Warlord Games Assyrian heavy chariots. These are just as fiddly and time-consuming to assemble and paint as they look, but they do make weighty and imposing models once complete. 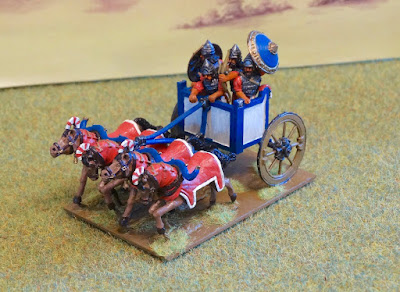 Assembled and ready to paint is a unit of Warlord Games Sarmatian cataphracts. These are lovely figures and I'm looking forward to having them finished, although some Parthian horse archers (also from Warlord Games) are ahead of them in the queue. 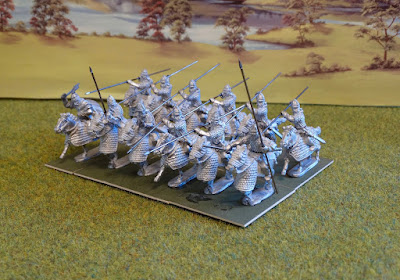 I find that I would prefer to collect all plastic figures, as they are cheaper and also generally easier to paint. But the ranges available are limited and metal figures need to be purchased. Warlord Games are generally my favourite, having a very large range of figures to choose from and usually being just a bit cheaper than other metal manufacturers. I do find their £5 postage for even the smallest orders rather excessive, but on occasion I have just had to bite the bullet.

However, feeling the need for a unit of archers, I decided to try a new source of figures and went for a pack of 12 plastic Levy Archers from Gripping Beast's Saga range. You can also get these in a box of 30. The problem is that you need some command figures, and for these I tried a command pack of Artizan Designs Carolingian infantry (in metal) sourced via Fireforge Games. To make the unit up to 16 figures I added a couple of Greek archers from a Wargames Foundry pack. Representatives of this mixed bag are seen below. The plastic archers (centre) and the Artizan command figures (right) really are particularly excellent. Another unit I am impatient to get onto the table. 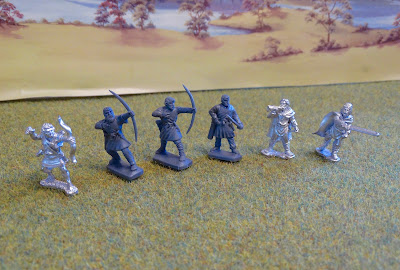 The rules themselves are working reasonably well, and seemed to pass the Asquith test during our game, although a number of notes were made regarding possible improvements.

And Finally...
Before my game with Stuart detailed above, in order to boost my enthusiasm and test the rules, I had played the Battle of Trimsos with my old pal Paul, utilising some unpainted units and a group of three SYW wagons as stand-ins for chariots. The set-up is seen below, being taken from the same angle as the photos on the book. Terrain is taking shape, mainly in the form of hills made from 18mm MDF contours. These will need painting to match the felt terrain mat I intend to purchase from S&A Scenics in the near future. One particular difference from the original Trimsos forces is that the three Hyperborean heavy infantry units are changed into two units of greater strength, but keeping the overall number of figures the same. This occurred on a whim, to make the two armies more distinct from each other.

In the photo below you can see the forces of Latium (Hyrkania in the book) on the left, with the men of Paphlagonia (Hyperborea) on the right. The armies are laid out as far as possible in the starting positions for the original 1962 battle. As mentioned above, the table as photographed in the book differs from the map in the same book, so anyone re-creating the battle has to make their own judgement on the exact placing of terrain and the size of the hills.