A review of the latest big rules thing in Napoleonic wargaming from someone who hasn't played them might seem a bit problematic. But this book interested me as soon as I heard about it - it's size, it's positive reception, and the fact that the various army lists and national characteristics (reputedly very informative) took up twice as much space as the rules themselves. So, in a moment of madness, I decided to pay out the £30 plus and get me a copy. As for waiting until I've played them a few times before I post a review... well, as I don't intend ever to play them that would be a really long wait. I'll explain later. 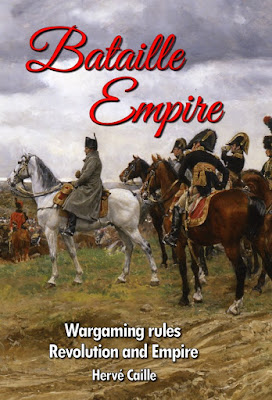 It's Big! And It's French!
Yes, this book is indeed a fair size, and no mistake. In overall proportions and heft it is very similar to my copy of Black Powder, but Bataille Empire is a soft-back and has a wacking 256 pages compared to the 182 of BP. I was a bit concerned that a soft-back binding might not be the best or most durable for wargaming, but the quality of the binding is good and the book can be roughly handled with confidence.

This is a translation of a book originally published in French. The standard of translation is generally very good, with only the odd mistake and the occasional stilted phrase. Considering the length and technical detail involved, it is a fine effort. The standard of photos, diagrams and tables, and the general formatting and layout, are all good. Compared to BP, the photos are kept within proper bounds, being attractive but never taking up more than a quarter of a page, and usually much less.

The Rules
Here I have to be careful. I would refer readers to this previous post, where I explain my view that I find most rule books these days too long and complex. Such is my view of Bataille Empire. I'm afraid the effort of learning them and playing them is going to be too great, and I doubt I would enjoy playing them anyway. But the online reviews by those who have played them are generally positive. It is instructive for me to reflect that a lot of wargamers like a bit of complexity, and are fondly attached to their tables, lists of factors, and their 'ifs, buts and maybes'.

I think, however, that my view of them as a complex set is sustained by the comparison in online reviews of BE to such sets as Field of Glory (Napoleonic), (which I wouldn't play if you paid me). As further comparisons, I would rate BE as a bit more complex than Over The Hills, or roughly comparable to General de Brigade. The jacket blurb does contain the compulsory phrase regarding fast play, but this is a term that is used far too much these days, and should usually be taken with a large pinch of salt. Wargaming is, in any case, not really a 'fast play' hobby. The best to be hoped for (by me, anyway) is for a bit of simplicity whilst retaining period flavour. These rules are not simple and will take a bit of getting used to.

However, the rules do score by their determined incorporation of national characteristics into most aspects of the rules, including command and control. Which leads me to the best thing about this book.

A Wargaming Resource
This is the great appeal of the book to me - the fact that about 150 pages are devoted to army lists and national characteristics for just about every relevant nation. These include most of the information on quality, organisation and tactical doctrine that the wargamer needs. The phrase 'army list' can bring up thoughts of those super-dry and rather off-putting lists one finds in various DBx books. However, here we are talking about a genuine historical resource which distils down the known facts into the required picture - how, and how well, did these nations fight, and what constituted the differences between them? And how can I put together a representative army for a particular period suitable for the wargames table?

Only the most basic appreciation of the rules is needed to interpret the various tables of organisation, but there is also a significant amount of straight text explaining the background, composition and quality of the various units of each nation, and crucially how they changed and developed over the Napoleonic period. The blurb in this case is bang on - "this book is complete and requires no other supplement". This, of course, goes a fair way to justify the considerable expense of purchasing this volume in the first place.

Doubtless there will be quibbles over some interpretations, considering the wealth of detail presented (see below), but as an introductory resource to the period for wargamers this volume could hardly be bettered.

Maida Mistake?
After all those gushing phrases, I should sound a note of caution based on one area of the book where I found myself questioning the content. As I am currently planning a re-fight of The Battle of Maida (1806), I was very pleased to find that battle featuring as one of the four example historical scenarios in the book. Having read Richard Hopton's book on the subject, which appears to be the definitive account, two things surprised me.

First, the description in BE of the River Lamato (or Amato) as 'not passable', whereas just about all other accounts rate it as entirely passable (Hopton describes it as 'easily fordable by infantry', hardly surprising for a small river in the south of Italy during July). This was a significant factor in the battle, as an initial combat between light troops is generally agreed to have taken place on the far side of the river from the main battle, which makes the map in BE incorrect.

BE also makes the point that the French had more artillery than the British, when the real situation appears to have been exactly the opposite. Hopton gives a very complete and detailed description of the composition and quality of the troops on both sides, and is quite clear that whilst four 6pdrs and two howitzers were left behind in the British camp, ten light guns were taken to the battlefield, giving the British a significant advantage over the four light guns of the French.

So it appears BE is not infallible. Hardly surprising given the ground it covers, and I feel a bit like the oft-quoted character standing behind a painter and decorator gleefully pronouncing 'you missed a bit there mate'. But it usually pays not to get all your information from one source.

A Definite Thumbs Up
I started by describing my purchase as 'a moment of madness'. I did indeed feel I was taking a risk in shelling out £30 for a rulebook I was certain I would never use just for the rules. But I'm very glad to have this book on my shelves, and it will be of great use to me. I would recommend it to any Napoleonic wargamer. The official online support is in French, but an English Forum is now available and will doubtless soon grow.

Finally, a recommendation for Firestorm Games if you are considering a purchase. At the time of writing, Firestorm have a worthwhile discount on this book and offer speedy delivery with a sensible price for postage - I had my copy within 48 hours. Nice one.

So there we are - a rulebook containing rules I don't really want to play, which I strongly recommend you buy. For once, the description 'more than a rule book' is entirely justified. Should you end up with a copy, I hope you will agree with me.

Not the sort of war games review one usually encounters. It sounds like a book I would like to see and browse through - and might make a good 'bedside book'. But, like you, I don't go for 'over-complexity' in rule sets, and am not all that impressed by what people term 'national characteristics'. Napoleon himself once remarked: 'there are no bad troops, just bad colonels.'

At any rate, thanks for the heads up!

Agree with all of that. My copy is also owned from a moment of impulse buying and I am not sure that I will ever use them, but I do massively appreciate that everything you will ever need is in the one book, army lists etc.

This is one of the better rules reviews that I've seen.

Archduke - you're the second wargamer in the last 24 hours to express doubts to me about 'National Characteristics'. These days I believe they relate only to the historical characteristics or attributes of a particular army and its constituent components - training, doctrine, quality, discipline, organisation, weapons etc. If you leave these things out of your historical wargaming then much is lost. IMHO, inclusion of such factors is essential and provides much of the interest in the games we play - see my previous post on Mollwitz for example.

Perhaps what we need is a more suitable name - maybe Army Attributes, or Army Quality. National Characteristics have nothing to do with national stereotyping - or at least, they shouldn't have anything to do with such nonsense.

'Bad troops' are the result of poor training, poor discipline, bad organisation, poor leadership, bad recruiting and conditions etc. etc. - so there certainly is such a thing as bad troops, or at least poor quality units. Presumably that is what Napoleon meant - most nation's men are as good as those from any other, but what counts is what is done with them and the conditions under which they serve.

A very thoughtful and interesting post Keith, and I agree with you entirely about keeping rules "simple". Although I'm no longer an active Napoleonic wargamer i will send a link to this to my many friends who still are, thank you.
Chris
http://notjustoldschool.blogspot.com/

Thanks Chris. Your own 'Seb's Soldiers' is an excellent example of a set of good and simple rules for a period which is often made over complex, IMHO.

Thanks Keith - Seb's Soldiers are made for 6 to 69 year olds and I've just about memorised them. I must do a blog with a PDF so others can see too.
cheers
Chris

Would love to see Debs Soldiers.... I'm trying to get my 6 yo into wargaming in the grand manner [napoleonic!]

Sergio. Good luck with Grand Manner for 6 year olds , Seb's Soldiers is much simpler and please see my blog Not Just Old School Wargaming where I posted the full story of it with links to rules and resources in April 2020
http://notjustoldschool.blogspot.com/2020/04/sebs-soldiers-maybe-learning.html
Chris G