The Ancient Battle of Gordium

Time to have another go with my ancients rules. I have risked sending them off to Osprey as a formal submission, but my hopes are not high. There are already so many ancients rulebooks available, and then there is the problem of how my rules would fit into the Osprey Games range. Nevertheless, hope springs eternal. Having put in a good deal of work on these rules, I am determined to make them available by some means or other. Time will tell how that plan works out.

Asymmetric Warfare
I have found that one needs to play a variety of types of game to test a rule set effectively. The Battle of Gordium poses the problem of a high quality army faced by a much larger, but low quality opponent. Here I was helped by my use of imaginary armies. Units could easily be shuffled around and two suitable armies produced without getting all unhistorical - or even worse, waiting a year until I had painted enough (for example) low quality Persians. In point of fact, I very much had the Alexander the Great vs. Darius example in my mind whilst preparing this game. The rules need to make it possible to re-create something like Gaugemela, and give the Greeks a good chance of victory. Apart from the battle rules, my points system would receive a test as two armies were assembled equal in points but very unequal in quality and numbers. I hoped a massacre either way would not result.

Paphlagonia were outnumbered 2 to 1, but 5 of the 8 Paphlagonian units were elite, whereas 5 units of the Latium army were poor, and none elite. Points totals were therefore equal.

Deployment
A traditionally terrain-lite ancients table! Not much to get in the way of the action, and a basic face-to-face encounter scenario. The town of Gordium is assumed to lie off the table to the west. The first army to break would be defeated. 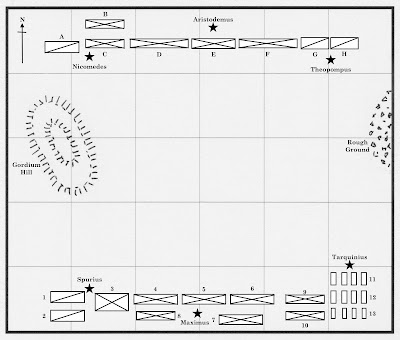 ... a most enjoyable and quite intense game. A number of detail rules that I had skated over in past try-outs were implemented and seemed to work OK. The higher quality army, ably commanded by Jon, had won out, but not in such a way as to indicate the points system was out of whack - I think it could have gone the other way if the dice gods had been kinder and I had played a more tactical game. Thanks and a 'well done' are due to Jon, who found himself fighting with unfamiliar rules in an unfamiliar period. Rating his alter ego Aristodemus as 'brilliant' may have helped a bit - the initiative was with him throughout the encounter!

Looks the part! Well done and best of luck with the submission!

Great to see you getting a game in again with your Ancient rules and your lovely looking figures. Good luck with your submission!

Our group, the White Rock Gamers play Armati 2 ancients games. Large double sized 150 point armies. I like how you put together this battle with what you have. Especially the commanders names. Some great looking figures there.

Thanks tjm. I've been doing a little bit of Armati myself recently with a local wargamer. The commanders names are all real, culled from various history books. Or at least, they are amalgams of real names.

Keith. Loved your article in slingshot. I more or less gave up actual gaming after wrg5 and only started again after the SoA conference 2017 at which point the choice of rules is mind numbing. Good luck with Osprey 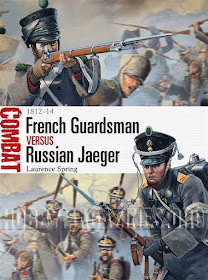