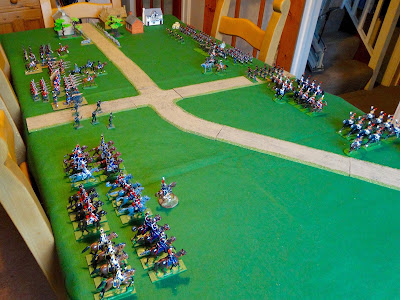 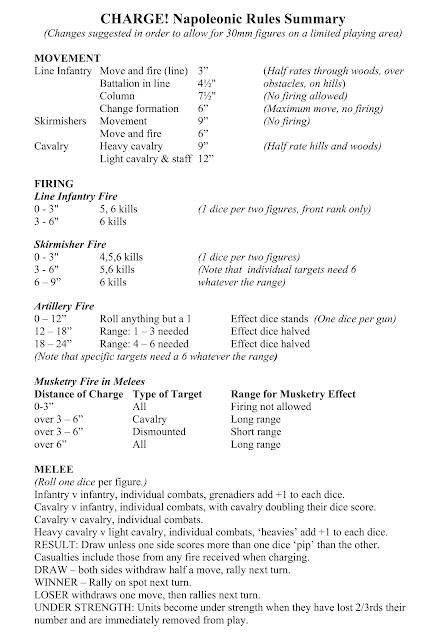 As a long time Charge! player who no longer has a large table and has failed to come up a good "small" version, I like Stuart's one and have snatched a copy to try it out!

A delightful way to spend an evening. Lovely figures, good company and not having to spend all the time with nose in the rule book. Thanks for sharing.

What lovely figures and set up.Thanks for sharing them with us all.
Alan
p.s the rules look most interesting

I also no longer have a permanent wargame table.

This reminds me very much of the Napoleonic games a group of us used to play about 40-odd years ago - Charge adapted for small units (9-figure infantry and 5-figure cavalry regiments).
However, our rules adaptations were far less well thought out than what has been presented here!

What a lovely looking game and nice to see you two chaps crossing swords again.

Thanks everyone. It's good to hear from wargamers who can still appreciate something a bit more (shall we say) 'traditional' than most gaming seen today..

What happened to the Warrior figures though ?

You are a lucky man - a charming game, and as you said previously, the joy of OSW is the company, not the equipment in use.

Wish Mr Asquith well for me - he has been a remarkable inspiration to a whole host of war gamers. He may not have been invited to “the wedding”, but he is royalty to my generation of gamers.

Marc, the Warrior figures are still safe and sound in their barracks!

Stuart keeps an eye on this blog and so has probably already seen your very kind comments - but I'll make sure they are brought to his attention.