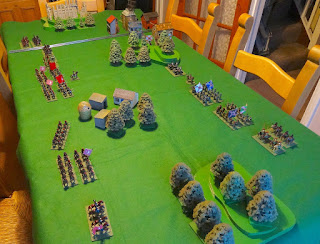 Lovely to see one of the lesser gamed conflicts being played. I agree that one of the joys of gaming is meeting up with like minded individuals and chatting about our wonderful hobby.

I think that an A4 set of rules would work providing, as you say, you are gaming with like minded gamers. In a sense Bruce Weigle did something akin to this at Colours this year, but with his 1870-1871 rules. Now it helped with him being the author and rather knowledgeable on the period, but often actions were resolved without recourse to die rolls, with Bruce deciding the most likely outcome. It worked remarkably well and the game moved along at a rare old pace.

So I look forward to possible updates on this potential 'project'.

First, let me say I know nothing about tactics post 1865, so I can easily stand corrected, but looking at the photos, did either side move in formations as shown post WWI. Both sides would have ample experience of modern machine guns from WWI and in the case of Russia, the Japanese war a decade earlier. The battle looks more like a SYW encounter?

Graham, I cannot correct you. Perhaps I should just say that strict historical accuracy was not our overriding priority...