Crikey O'Riley - another set of rules for the 18th century. Here I am with my own set to use as well as Black Powder, which I still enjoy playing and am perfectly happy with. But Maurice has a secret weapon - a free to download 'Lite' version. 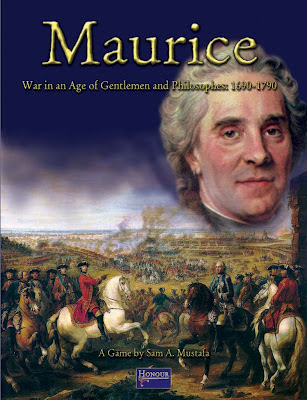 I love Sam Mustafa
As you will probably know, this is the chap who gave us Lasalle and Might and Reason. Sam is to be heartily congratulated for going along the path of bringing out a Lite version of the rules which those interested can download for free (along with the necessary cards and a fast-play sheet).

This has the unusual virtue of being good for both seller and buyer. The same thing helped Blitzkrieg Commander become popular a few years back, and provides an excellent chance of creating a good vibe for a set of rules. And with rule sets being £20 or £30 a pop these days, and there being so many of them, you can't just buy a set on the off-chance that you'll love them. So, nice one Sam. A pity more authors and publishers are not so enlightened.

I hate Sam Mustafa
I nearly didn't bother looking into the rules at all when I saw the sub-title. 'War in an Age of Gentleman and Philosophes'. Hmm. One thing that irritates me occasionally about SYW gaming is the idea that this was some sort of 'Golden Age of Warfare' - in fact I think the phrase is actually used in the intro to the original Koenig Krieg rules. Charles Grant senior has much to answer for here. The quaint and whimsical world he created in The War Game seems to have led some gamers to believe that war in the eighteenth century was all about gentlemen on opposing sides inviting each other's regiments to fire first, following which everyone would march off to the nearest town for lunch. I'm confident Mr Grant knew better, and I surely don't need to belabour the fact that this was not the case. The battles and campaigns featured the most appalling slaughter and suffering (to men and animals), and the civilian population had their share as well - Frederick's occupation of Saxony being a case in point. It is generally argued that things were better than during the horrors of the Thirty Years War. Quite true, but this doesn't mean that the wars of the eighteenth century were either particularly civilised or honourable.

Even ignoring the warfare entirely, the period could just as easily (and probably more accurately) be called 'The Age of Injustice and Inequality', or some such. I have a great interest in, and admiration for, the Enlightenment and all it encompassed, but one has to be realistic about what life in the era could mean for ordinary people. As you can see, this is definitely a soap box issue for me.

Anyway, setting subtitles to one side, there is also the issue of pricing. Black Powder was expensive, but when you had the book in your hand you had to admit that £30 was probably reasonable for the physical object itself. Now the introductory deals are over, the Maurice rulebook is £25. Encountering a friend's copy, I was struck by its relatively slim nature, flimsy card covers and thin paper. These are all good attributes if they result in a book costing £15, maybe £18. But Maurice just doesn't have the heft or quality for a £25 rulebook, in my personal opinion. The cards are an additional £12, which is also not cheap, although the cards themselves are of good quality. The two together can be had for £35. Definitely not convinced here.

The Rules
Ah yes, to get to the point. Most reviews of the rules have been positive. On the basis of one game with the Lite version and another with the full rules, I would generally agree. I have no experience of card games, so the gameplay made a refreshing change. Good fun was generally had. Things move along quite smartly and the rules for the basics are simple and easy to grasp. The advanced rules look worthwhile and the inclusion of a campaign system is also to be applauded.

The main problem so far has been the tendency to have games where half your troops don't do anything at all for the whole game. Being used to Warmaster style rules, I have no objection to some of my troops being able to do little or nothing for some of the time. But Maurice can take this to another level. However, I can see that with more experience with the rules and how to use them to best advantage, this may well change. At the very least, it seems to me that historical deployments and tactics are encouraged - indeed, they seem to be vital.

I am fortunate in having some opponents who have the rules, but no figures. Having the figures, I can provide these and get away with having no rules for the time being. Should the games improve, and I get the knack of bringing all or most of my forces to bear, I may well swallow my pride and invest in a set. Maybe they'll appear on Amazon at a discount.

For a good overview of the rules as our little group has encountered them so far, see my old mate Steve's blog here. If you want a change from the various complimentary reviews, Angus Konstam is far from impressed on his Edinburgh Wargames site (see the fourth battle report down), although I think his comments are misguided.

Definitely one to watch.

A fair and balanced review of the game and the rulebook Keith.

I wholeheartedly agree with regards 'Lite' rules being used more widely, a point I have also made on my Blog.

I will now set off at a gentlemanly trot to see what Angus Konstam Esq has to say.

I love these new rules. They have more depth and period 'feel' than was apparent on initial read and are just plain fun.
But I do think the emphasis is on the Game aspect rather than 'strict' historical outcomes than some sets.

I see them as a very nice and playable alternative set rather than a replacement for other sets I use as mood takes.

Per your soapbox, one of my favorite opening shots in any movie is from Gilliam's The Adventures of Baron Munchausen, where a title card says "The Age of Reason" and the shot then immediately cuts to a brutal and bloody siege.

Thanks for a good and entertaining review Keith !