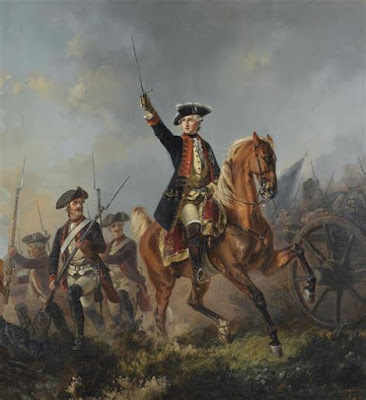 POST OF HONOUR
First, two links to version 3 of Post of Honour. The movement modifiers table is slightly changed, making formation changes in particular just that bit slower to better represent linear warfare. Plus the usual tweaks here and there - check the melee section in particular if you already have a copy of the rules.
Post of Honour v.3
PoH Playsheet v.3
MAKING COOL LINKS IN COMMENTS
You know how it is - you see a link in a comment but it's not live - you can't just click on it. Oh, the frustration, the senseless anger.
Fortunately I happened upon this simple explanation of how to put live links in blog comments. I've used it and it works. Long live the revolution!
http://www.echoecho.com/htmllinks01.htm
Gotta run. See you again soon!
Posted by Keith Flint at 09:37

Nice rules, now I'll try to paint an opponent for my Prussians (;-)). Some remarks:you suggest rather small units - personally (as a fanatical megalomaniac ;-)) I like larger batallions - 28 figures, because then I can place officer and drummer, plus two standards behind him, on one stand in the middle, and left and right of him three stands of four figures each. It is not entirely clear to me what the effect is of two lines for a unit. Perhaps I overlooked this part in the rules ? "Grazing" cannon balls being bounced like a football probably is from the naval guns - a tactic that worked because the water acted like a very hard floor. On land the ball probably would not "bounce", but "roll". Numerous contemporary descriptions tell us that soldiers saw a cannon ball slowly running and tried to stop them with their foot. Unfortunately the foot was then ripped off ! Ans a lost comment: you give a "+ 3" for roads. Mind: in this time (and a number of decades later) a "road" often wasn't as good as now. IIRC someone mentioned (begin 19th century) a horseman going to London and was quite happy to gain a speed of about five miles an hour on the road... Anyway, I have downloaded the rules and hope to create some French as opponents !

Thanks, Keith! I'll give these a read through. I'm thinking about getting into the SYW in the near future.
Thanks again,
John

For units bigger than about 24 figures you might find it necessary to extend the game distances a little. I look at the ratio between the frontage of a unit and musket range, which shouldn't be too different. Best thing is to play the rules and see how it feels.

I always game with units that are based with 2 ranks of figures. The last 2 pages of the download (14 and 15) show how the basic formations work.

Roads bonus is for wagons and artillery only (i.e. wheeled vehicles), which I thought was justified. Grazing fire - this phenomenon was well known by artillerists and used as part of standard practice, even being used to extend the normal max range of the guns. It didn't always work, of course, and the method reflects this.

Thanks for your comments and hope you enjoy the rules!

Hi Keith - they look good.
Are these essentially Honours of War 'lite', or a different beast?
Cheers,
Mick

Not really HoW-lite; they were written from the ground up with simplicity as the main objective. I will be the first to admit that there are no striking new ideas in PoH, but I think that should make them more intuitive to the majority of gamers.