...and a few other random thoughts.


Visitors may have noticed the absence of battle reports on this blog of late. The sad fact is that I'm now working away from home for 5 days each week, and this combined with the enervating effect of the recent heat wave has meant time and motivation for 'real' wargames has been limited. In these circumstances, the value of developing my DBA wargaming has become apparent. These rules give absorbing games using real toy soldiers, but with super-quick setup and clear away times, as well as limited impact on what the rest of the family is doing.

I have however been managing a bit of painting and model making. This has triggered the following reflections...

Zvezda vs Skytrex (and others)
Most of my German tanks and transport vehicles for Poland 1939 are from the Skytrex 1:100th 'Command Decision' range. A lovely catalogue of vehicles: comprehensive, nicely proportioned, accurate and well moulded in white metal. They are certainly a bit pricier than most, but generally worth it, although some prominent wargamers seem to disagree. I've felt no great temptation to explore other ranges, but recently a few models from the Zvezda catalogue suitable for Poland have appeared, and I couldn't resist trying them out considering the ridiculously low prices. See pics below.

Regarding the Kfz15s, I have a picture book on the Polish campaign called September Storm, which I highly recommend. Lots of interesting photos with very useful captions. The Horch kfz15 features strongly amongst the illustrations, and was obviously a useful and well-used vehicle. Hence my desire to field a couple, which will find a place in a recce or motorcycle formation. The photos below give a flavour of the vehicle in action. Top one definitely Poland, lower one location unknown. 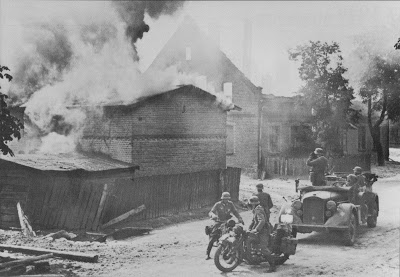 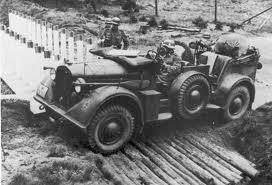 Which brings me to the Zvezda Sdkfz 251 Ausf.A kit. Although sold as an Ausf.B, the shape of the front armour plate and the unshielded mg on a crane mount reveal it to be an Ausf.A. The image below comes from the excellent Spotting Round website, which I thoroughly recommend.

This is currently the only Ausf.A available in 15mm, and this was the version used in Poland. So why didn't I buy some? Well, I already had 3 kits from Parkfield Miniatures, bought some years ago from a line that was about to be discontinued. At that time, the Parkfield kits were themselves the only Ausf.As in 15mm. After around 2 years in my modest lead hillock, I finally got around to completing one:

Now, to finally address the point made in the title of this post, what the Parkfield model lacks in finish it makes up for in terms of heft. Yes, it's heavy, man. Those crew figures are standing on a good, solid block of metal which is very satisfying to move around the table, and which stays where it's put in the heat of combat. The problem with those Zvezda kits is that they weigh nothing, and are easily flicked aside by a wayward hand or waggling extending ruler. That's one reason why I like the Skytrex kits - apart from the fact that they're usually better models than much of the opposition, they're all possessed of the kind of heft only white metal gives you. Don't underestimate the value of this quality if you've only ever used plastic kits: especially if you're a bit of a sad git like me. Thumping these guys on the table gives you the feeling you really are advancing with a Panzer Division.

As for the Zvezda models, what everyone says about them is true - they go together nicely, are well produced and provide you with accurate if fairly basic models.

The Sdkfz251 in Poland, 1939
Now I know most WW2 gamers these days are obsessed with Normandy 1944 or Eastern Front 1943, so for the record I will confirm that some 251s were used in Poland in 1939. For example, I understand that about a company's worth were issued to 1st Panzer Division, who usually had the pick of the latest/best kit in the early war period. In all, I believe around 68 were issued for the campaign as a whole, some as command vehicles. The images below were found on this Polish language site.

Parting Shot
Those Zvezda ZIS-5s will be of particular interest to FoW customers left high and dry when the 'Battlefront' Polish range was curtailed. There are currently no infantry transports available in this range, and no vehicles to tow those anti-tank guns and artillery either. It just goes to show that the age-old problem of the incomplete range is not solved by having corporate players in the wargaming market. True North Miniatures can still supply Lazik staff cars and Polski-Fiat trucks, which are acceptable if not great. The Praga truck produced by QRF Models is also an historically correct vehicle for Polish forces, but again it is a distinctly average model.

So come on Battlefront. I know I've been critical of you in the past. Now prove me wrong and bring on those Polish soft skins!
Posted by Keith Flint at 16:51

This is interesting, supports your view nicely...

...interesting - I thought they were just plain dark grey!

PS. In case you didn't get the message feel free to use any pictures on any of my blogs and many apologies for the delay in getting back to you... grand-fatherhood has lead to absent mindedness! :o)

Is it not possible to add some sort of balast inside the kits to give them a bit more heft? I agree that the last thing you want in the heat of battle is vehicles that move when you thump your fist on the table...

I usually base my models on 2mm MDF, but it adds a bit of weight to the models.

Steve, thanks for the link. And if FoW say the camo was grey and brown, who are we to argue?

Genom, I agree, basing would help out the stability of those Zvaezda kits, although my personal preference is not to base vehicles.

Stryker, what's this about thumping the table with your fist? Sounds worrying. But then again, if you find it gives you an advantage over your opponent, maybe I'll give it a go...

The Zvezda kits are lovely, but I agree that the lack of weight does always seem funny after so many years of manouevering metal models. One solution other than basing them (not for me I'm afraid) is to add some small bits of lead to the models to give them substance. One can then bang the tables to one's hearts content without said models bouncing all over the place.

Thanks for the 'heads up' re: the September Storm book, I will check this out as always keen for more reference material.

Hmm... this pounding the table with your fist idea is growing on me...

I'll bring along my safety specs next time in case little bits of lead start flying all over the place...