A Scenario For All Ages? (part two)

Thinking it might be interesting to try the same scenario in two very different periods, and having completed a very enjoyable game in the SYW period, it was time to have a go at WW2. Readers of the previous post will recall that this was scenario 37 from the Grant/Asquith book Scenarios For All Ages, entitled 'Night Attack 2'. I kept the terrain the same as for the first game, except for substituting built up areas of a more modern appearance and smaller scale for the second battle, which would be fought out in 15mm between Polish and German forces of 1939. Rules used would be Blitzkrieg Commander.

The advice from the scenario book is,

'For the modern period, [...] take units as troops or platoons, or for 1/300th scale, companies and squadrons'.

It was quickly apparent that converting a Horse and Musket 'unit' into a company would be the best approach for a BKC game, cavalry of course becoming tanks. A company would typically be 3 infantry stands or 3 tanks in BKC, with one stand or vehicle representing a platoon. The units from part one therefore became the following:

In detail, the Poles therefore were:  CO (CV8)

The Germans therefore had a bit more than the 50% advantage in points recommended in BKC for an Assault or Deliberate Attack scenario. However, I decided to keep to a fairly strict interpretation of the book scenario to make it an honest test. I also guessed from the first run through that things might not be as straightforward for the attackers as the forces and deployment might suggest. The map below will serve to confirm the limited nature of my artistic talents: 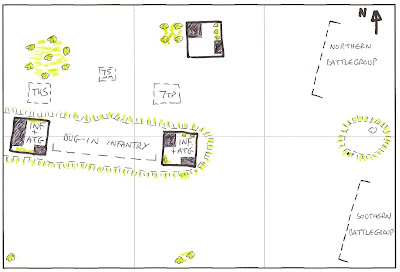 The Game
Once again I was lucky enough to play a daytime game at the weekend (with wargames buddy and all round good egg Paul). Often more relaxing than an evening game, I find. 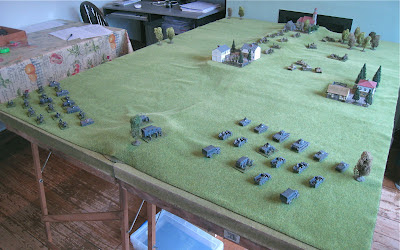 So here's the set up. Once again those nasty Germans are attacking.

A quick close up of the Polish 75mm artillery support unit behind the ridge.

As dawn breaks, the thunder of an approaching armoured battlegroup greets the Poles. 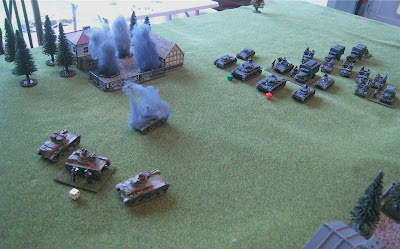 A scheduled bombardment hits the empty north village, whilst the northern German group starts to penetrate behind the ridge. They soon start to chew up the less concentrated Polish forces attempting to react to their unexpected appearance. 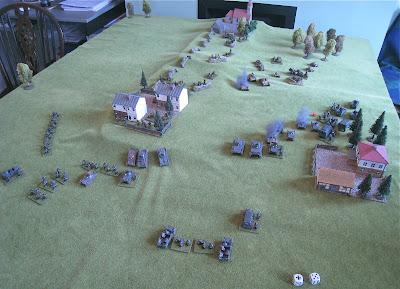 Overview around mid-game. The Poles are re-positioning gradually. In the background the CO has moved to the western village to get the infantry and anti-tank gun on their way. The infantry battalion HQ concentrates on moving troops into the east village, where the German southern battlegroup is closing in. 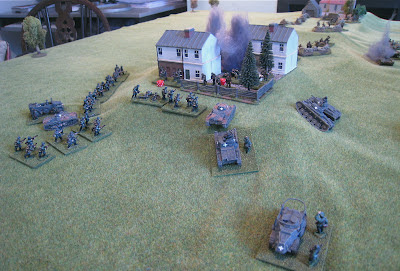 The east village was a registered target for the German artillery (having been the subject of scheduled fire on move 1). Thus German units could approach the outskirts of the village confident that their supporting fire would be accurate. The red dice indicate the reassuring effects of the auto-suppress rule. But with everything set up for a close assault, the final command roll failed! 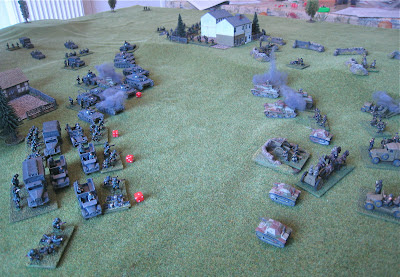 Behind the ridge, the German tanks are heavily engaged: tanks from the southern battlegroup have moved round to reinforce their comrades. Meanwhile the motorised infantry try to extend the outflanking manouevre firmly into the Polish rear. The TKS tankettes deploy gallantly and their machine guns put a temporary halt to the German advance. For non-BKC players, those red mini-dice indicate suppressed units. 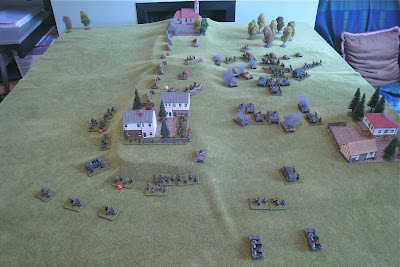 Overview as the game was ending. The Germans did finally manage a close assault on the village, but they were flung back after desperate fighting. The slogging match behind the ridge finally ended in the Germans' favour, as it always seemed likely to. After 8 moves the Poles had exceeded their breakpoint, losing 12 units. They therefore had to make a command roll of 7 to continue, but a roll of 9 meant victory for the Germans, who only lost about 7 units. 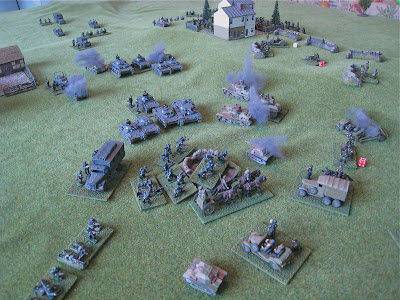 Last move. After receiving many turns of fire, it takes a close assault to finally eliminate the Polish artillery position. There was no question of the Poles retaining a reserve. The speed and ferocity of the German attack meant the Poles had to throw in everything (including the kitchen sink) to stem the tide. At least that's my excuse.

Points to Ponder
The second edition of BKC improved on an already excellent set of rules, but this game highlighted 2 aspects that can be a little frustrating. Units dug-in or occupying built up areas are really hard to shift. The Poles in the east village could only be hit on a 6, and still had a 5 or 6 save on any hits received. Then it still needed a further 6 to suppress (unless using artillery and the auto-suppress rule). Perhaps a little too much in game terms.
Secondly, close assaults can be a little complex if you aren't fully familiar with the rules. Still, correct tactics of suppressing your opponent then assaulting with superior numbers will usually work, if you can make the command rolls.

As for the scenario, once again it produced an excellent game. In the WW2 period it did feel a little weighted towards the Germans, but a single game is only a limited test. Certainly the Germans (Paul) won fairly easily in the end, despite a succession of unlucky command blunders and the refusal of the German dice to produce the required number of 6s!
8 moves were played in about 3.5 hours of gaming.

What's Your Favourite?
I've noticed on a number of blogs recently the preference of the owners to illustrate their battle reports mainly with close up photos of the action, which show off the miniatures nicely but make it hard to get an overview of the game. This is often compounded by the lack of a map, or photo of the overall set-up, to give the reader his or her bearings. As any reader of military history will know, trying to describe a battle without an accompanying map is like... well, ... it's like doing something rather silly. Choose your own metaphor. This blog will continue to champion the cause of giving viewers the whole picture!

A 2006 Cabernet Sauvignon was in use throughout to help things along. Despite the trade name of 'Rusty Goat', this New South Wales wine proved to be an excellent accompaniment to wargaming.


And so farewell 'til next time.

I very much appreciate an overall map AND photo of the table at start and perhaps again at a critical point.

That being said, I also DO like a few close-up photos as well . . . but if I just had to have one, I'd go for the map and overall view.

Looks good - almost had me looking at early WWII. However I'll certainly be on a recon for Rusty Goat.

Maps are good, but can take a lot of work. Overview photos AND detail photos are probably the best, barring maps. I like some reports I've seen that use a comic book style, photos with captions. I think the key is well-illustrated with minimal text. One thing I find I sometimes have trouble with is keeping track of who is who in the game. I also like reports that include some commentary on rules and other elements of the game.

Fitz-Badger - yes, I like those reports where the photos have been overlaid with annotations, and where deployment areas and lines of attack are marked in. One of these days I'll work out how to do it!

A very nice game by the look of things and as always a pleasure to read.

The overall shots really do help with getting an idea of how the game is progressing.

Keith,
Thanks for a good report, well-supported by photos and a map. What more could one ask?

You do seem to have a lot of readers named Steve. ;oP```

I like over view shots with the occasional close up view. I agree w the others, lines and arrows on the big pictures are nice. Also comments on how the rules work. Help out.

I agree completely on getting people out of hard BUAs. It is really tough.