To exploit the full possibilities of Benghazi Handicap I needed to acquire some later tanks than those I already had, having concentrated in my gaming so far on the period before Operation Battleaxe. So a couple of packs of GHQ Crusader 1s were ordered from Wargames Emporium of Sheffield (excellent service and good price). This gives me a perfect BKC regiment of 9 tanks plus one extra for the command stand. I have decided that ''Swanning About' looks good fun for my next battle, so these chaps will represent the 6th RTR in their first outing. The colour scheme may not be accurate: I chose a kind of generic Crusader scheme, using Humbrol 67 (panzer grey) over Humbrol 63 (sand). Tracks were painted brown (Humbrol 186) with a little highlighting in Light Stone (Humbrol 121). 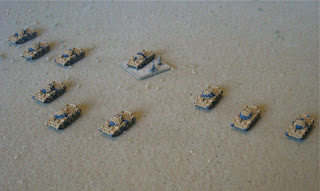 I'm hoping to fight the scenario next week, so a battle report should follow in the not too distant future. I also want to fight the Battle of Bir el Gubi at some stage, so I will eventually need four more packs of these guys to create 3 Crusader regiments. 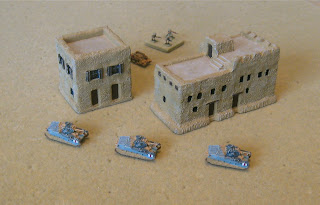 Also recently added are these two buildings from Timecast. I was looking for something that might represent Fort Capuzzo in a 'Rally Forward' refight (and of course stand in for other desert forts in the future). I was thinking at one stage of scratchbuilding something, but a representation of a real desert fort would probably take up too much room on the board: plus the additional problem that I couldn't be bothered with the hassle! What I needed was something that would give more of a sense of a desert fort than my current GHQ civilian buildings, and I think these models do the job. They are from the Middle Eastern and North African range, code 17/004. As usual with Timecast they are good quality castings, with just a few bubbles along the crenelations which were quickly filled.

Wandering off period, I also wanted to say that I have added a link to the Grand Duchy of Stollen blog. Can't imagine why I didn't add the link earlier. Stokes Schwartz has created a wonderfully inspiring Old School look for his SYW battles which is a must-see if you are into this period.
'Til next time!