I Just Wanted To Point Out...

...something that, as a SYW wargamer, is one of my little hobby horses. 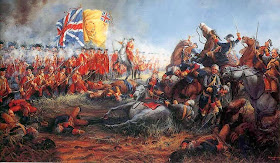 In the introduction to my copy of Koenig Krieg, the eighteenth century is described as 'the golden age of warfare'. This concept will be familiar to any wargamer who has read the works of such giants as Charles Grant (senior) and Donald Featherstone (RIP), although these sensible gentleman expressed the thought rather less naively. This kind of thinking occasionally also surfaces in various current blogs which don't have the excuse of being written many years ago.

I have long thought such judgements misguided. Having recently come across the following quote from Dennis Showalter's Frederick the Great: A Military History (2012), I wanted to share it with other wargamers.

Few interpretative structures have been as thoroughly shredded in the past quarter century as the one describing the eighteenth century as an age of limited war. Images of battles fought in vacuums by marginalised men while normal people freely go about their business no longer survive even in textbooks

The interested reader would also do well to consult Szabo's The Seven Years War In Europe, or Duffy's The Military Experience In The Age Of Reason. War has no golden ages, and the wars of the 18th century appeared 'civilised' only in comparison to the appalling excesses of the Thirty Years War which preceded them.

My hobby is about playing with toy soldiers, and must in the end be conclusively separated from real warfare. Doing this means educating oneself about the historical reality in ways other than uniform details and weapon statistics. Such an educative process is our responsibility as thinking wargamers, and ultimately also as citizens.